We are honored that The Albany Business Review selected our 17 Chapel Boutique Condominiums as one of “50 projects that are reshaping life and business in the Capital Region,” featured in their special publication, “Transformations,” released today!  17 Chapel has estimable company on the list, including Global Foundries, SUNY Polytechnic Institute, and Vicarious Visions. 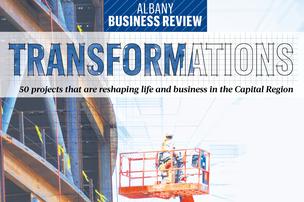 “There were plenty of doubters three years ago when Rosenblum Development in Guilderland took a big gamble and invested $9 million to build 24 luxury condominiums in downtown Albany…The result is 17 Chapel, a building that looks nothing like its former self: a parking garage/theatrical equipment warehouse…17 Chapel is part of a wave of redevelopment downtown, as the upper floors of old buildings are converted into apartments.  About 200 units were created between 2002 and 2013 – a $30 million investment – according to the Downtown Albany Business Improvement District.”  Read more